It’s been almost two years since my pastor preached one of the most vulnerable and heartfelt sermons I’ve ever heard.

I downloaded the podcast because I wanted to listen to it again:

I love Jesus too much to fake it.

Now, I have not been living a fake life. I’m not an imposter pastor. I’ve been trying to follow Jesus earnestly. I’ve just found out over the last year that I really need Jesus in my life more than I realize. . .”

For those wanting to listen to the entire sermon, you can do so here:

It was powerful. So many of us could relate to feeling like we had lost “it” and how we didn’t want to fake it anymore. I wrote him an email that week thanking him for sharing with us.

Fast forward one year later. I sat in a room of church leaders to hear an important announcement about the future of our church. That’s when we were told that our pastor had plagiarized, virtually, every sermon he had preached at our church.

I had to know if this particular sermon was one of them. Within a few minutes, I was able to find the source of the original sermon. I sat down and clicked “play” on the video of his sermon and immediately started to cry.

The reality of the situation fell on me as I realized that our pastor had set up an entire scenario over months and months, including staging his re-baptism, so he could preach that sermon.

It wasn’t just the ideas of the sermons that were the same. It was every word. It was the way he paused and let his voice break at just the right time. Identical.

It’s been a year since that church meeting. That pastor is no longer at the church, but we can still feel the impact.

I’m writing this for two reasons. First of all, after all of this broke, I scoured the internet to see if anyone else had this experience. I wanted to know if anyone had a similar story. Second, as bizarre as it seems, there are people who would argue that the pastor did nothing wrong.  Since the church seemed to be growing and people were being saved, they argued that he shouldn’t have been asked to step down.

I decided to write the blog post I wished I could find then. One that answers a few questions:

So, what’s the big deal with using someone else’s sermon? Lots of pastors preach other people’s sermons.

“I have problems with secondhand sermons because I think preaching and teaching is the pastor’s calling. It’s his job. He is supposed to spend whatever it takes to know the Scriptures and to make them plain for his people. And as a pastor of a local church, his job is to read the Scriptures and understand the Scriptures specifically in relation to the needs of his flock.” – John Piper

If the leaders of your church hired your pastor with the understanding that he was going to write and preach his own sermons. It’s dishonest to present someone else’s sermons as his own and it’s not fulfilling the job description.

Second, the original author of the sermon wrote that sermon after seeking God’s direction for his particular congregation. When our pastor used those sermons, it wasn’t just the biblical interpretation he used. He read letters to us that he said had been sent by people in the community. He told us stories about his family. He said that God had led him to write these sermons for our particular congregation. All those things he shared with us had been written by another pastor for his congregation.

Our pastor stood in front of us and said, “I believe what has happened in the first 34 years of my life is nothing but God setting the table for me to preach this sermon series.” That was a line directly taken from the source material.

If the pastor leads his congregation to believe something that he knows isn’t true, that’s a problem.

I asked Dr. Gary Stratton, Professor of Spiritual Formation and Cultural Engagement at Johnson University, his thoughts on this issue. This is what he had to say:

“A journalist who uses so much as a unique sentence in their work without giving credit to the person who wrote it, faces immediate disciplinary action and, if repeated, a loss of employment. A faculty member who tries to pass off someone else’ research or creative project as their own will find themselves seeking for employment, not in another university, but outside of higher education altogether. I’m not sure why pastors should be held to a lower standard.

Pastors can and do borrow ideas from other preachers. There is even a long history of reading entire sermons written by others when you think your congregation really needs to hear it. John Wesley was converted while listening to the reading of a sermon by Martin Luther. The difference is, Wesley knew he was getting s sermon from Luther not the preacher because he told his audience whose ideas he was reading. “

Yes. I read this article that lays out the Do’s and Don’ts. It gives some great guidelines. The author’s clincher statement is this:

“The point is that good communicators borrow material all the time. But ethical ones let you know where they borrowed it.” – James Emery White

The good things that happened can and should be affirmed. Dishonesty still needs to be addressed. Those are not mutually exclusive. If a church gives a pastor a free pass on this issue simply because giving and attendance is up, it sends a message that honesty and integrity don’t matter.

I’ve heard that sentiment. That’s disappointing because it’s not just about having permission to use material. Any pastor that would be “honored” to have another pastor use their material in a way that misleads their church is part of the problem.

Would you be honored to hear that our pastor told your stories as his own and a congregation is now left feeling betrayed?

Church leadership should be aware of the load on a senior pastor. If he can’t sustain a healthy life balance, his job description should be changed.

If you need to use someone else’s material because you don’t have time to do the work yourself, it should be done in a way that gives credit to the person who wrote it and the personal stories should be “personal”.

In my conversation with Dr. Stratton, he concluded with this:

“Passing off, not only someone else’s words, but their personal experience itself as your own goes way beyond plagiarism. At very least it is a profound breach of ministerial trust.”

I hope you never experience this, but if you do, these are some resources I found helpful:

10 Do’s and Don’ts of Pastoral Plagiarism

My Pastor Uses Pre-Made Sermons. Should I Be Concerned?

If you found me because you have personal experience with this, I’m so sorry and would be happy to chat if you need a listening ear. You can drop me a note here: amy(at)amyfritzwrites.com

I’ve compiled a list of some of the most helpful resources, books and articles I’ve found about church health and culture.  If you’re interested, you can sign up here: 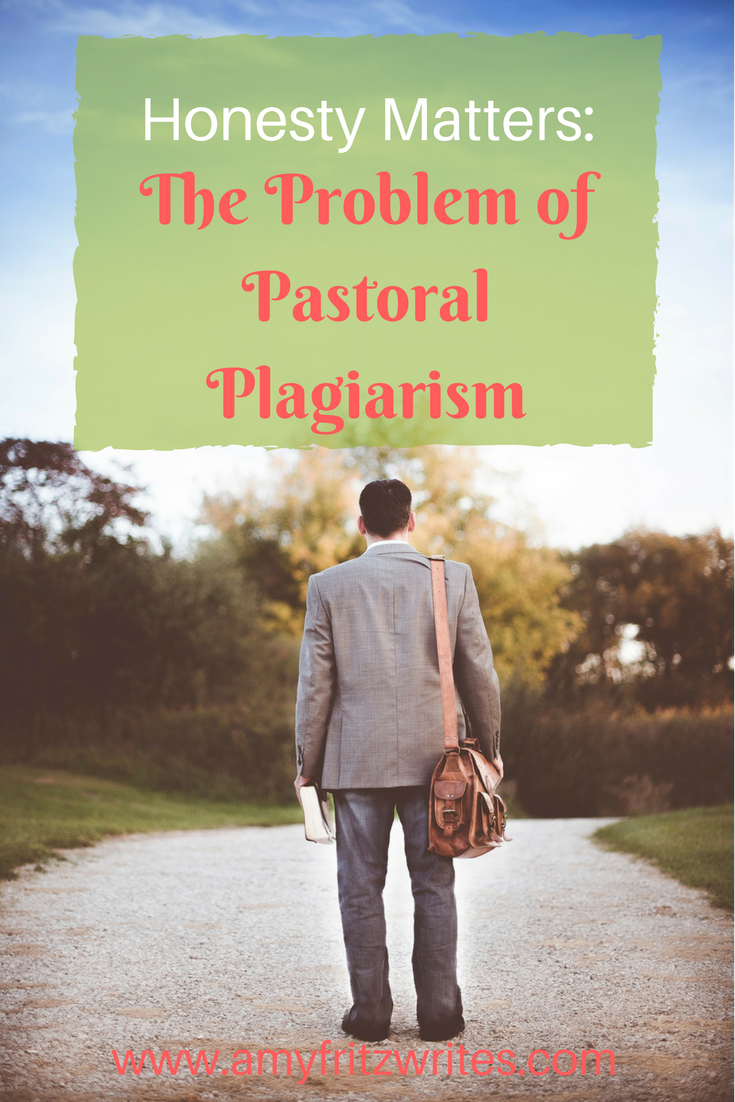 13 thoughts on “Honesty Matters: The Problem of Pastoral Plagiarism”