It’s been more than 30 years, but it’s clearly etched in my mind. Every summer my brother and I would spend a week with our grandparents. We were city kids getting to experience farm life. Working in a big garden, carrying wood for the fireplace, helping process butchered chickens, riding the ponies (after we caught them), learning to work the riding lawn mower, and enjoying my grandmother’s amazing baking. And, the dog. How could I forget the dog? First it was “Tippy” and then is was “Doc” and “Pepper”. I loved those dogs!

There was a lot of fun and a lot of work.

There was also a grandfather who loved his grandkids a lot and wanted what was best for them, but didn’t always go about it the right way.

My brother was born with mild cerebral palsy. He does not have the ability to use his right hand very much at all. During those times on the farm, my grandpa would sometimes try to give Brian work to do that he thought would toughen him up and help him be able to use his right hand better.

Grandpa would split wood and then make Brian carry it with his right hand. I remember feeling so helpless as I watched him struggle. The task that is so clearly seared into my memory is the time he filled a huge bucket full of rocks and then told my brother that he needed to carry it with his right hand around the house. What my grandpa meant as something to strengthen my brother actually hurt him. It did not rehabilitate his arm. What it did was crush his spirit as he struggled to make a lap around the farm house. 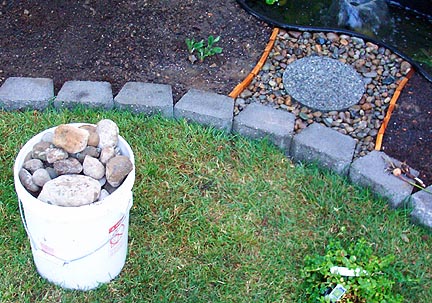 Why am I thinking about this so many years later? I’m afraid that I have spent time doing the same thing to my own son. There have been many times when I have not been patient and I have said things because I wanted him to pull himself together and not be so fixated on his things and sad about getting rid of things. I have made some very poor choices.

I’ve been asking Ethan, in my own way, to carry a bucket of rocks around the house because I wanted to strengthen him.

My brother still doesn’t have strength in his right hand, but that doesn’t mean he is “less than”. He loves his wife. He is a great brother to me and a doting uncle to his nieces and nephews. God has used him and worked in him. I am praying and believing that God will do the same with my son. And I will love Ethan and accept him regardless the size of the miracle God performs.

I’m not going to ask Ethan to do laps around the house with a bucket of rocks anymore. I’m praying that God will give me wisdom to fully love Ethan right where he is now while also challenging him in ways that are helpful, not harmful.

Whatever the outcome, it will be good for Ethan and glory goes to God.