Several years ago, after a  confusing season, I started trying to make sense of our experience with a narcissistic Christian leader. I was determined to learn more about narcissism. That’s when I stumbled upon a quote from Dr. Diane Langberg. Dr. Langberg is a psychologist specializing in trauma. She has been practicing for over 40 years. She speaks frequently about power abuse and narcissism.

After finding a quote from her, I rabbit-trailed until I discovered a video entitled, “Narcissism and the System it Breeds.” Like any good nerd, I pressed play and took notes. What she had to say blew me away. It made such an impression on me, I asked Nathan to watch.

As he watched the video, I watched him. I  jumped in and paused the recording from time to time and said things like, “See?” and “What do you think?” and “Doesn’t that sound exactly like  what we experienced?” I was learning things about narcissism I had never heard before. It gave me a framework upon which to hang some painful experiences.

What stood out to me the most was that narcissism doesn’t merely manifest itself in individuals. Narcissism infects systems.

A light bulb turned on.

I began to understand that an organization could terminate its relationship with a narcissist and still be unhealthy. The exit of one unhealthy person doesn’t solve the problem if narcissism is embedded in the organization itself.

In fact, a narcissistic system exacerbates the hurt of those who have already been victimized. This leads to multiple traumas for victims. They believed the system would protect them from the narcissist only to discover the system exists to protect itself.

Dr. Langberg went on to say that a crisis helps reveal the character of the narcissist. In the end, the narcissist is a wolf that feeds off the sheep. He doesn’t protect them. Vulnerable people assumed they were following a shepherd. Too late, they realize they have been fooled.

Over the last 4 years, I’ve recommended Diane Langberg’s work to anyone who feels they may have experienced pain from a narcissistic leader. She has a book coming out in the fall, Redeeming Power: Understanding Authority and Abuse in the Church. I’m so grateful for her work. You can find more resources from her here.

How The Mighty Fall

Another thing I did to try to make sense of what I was seeing in church culture was to read. Last summer I picked up one of Nathan’s business books. I spent time paging through How the Mighty Fall by Jim Collins. This book shares a helpful model that describes how many organizations go through stages of decline .

This is where I admit I had to look up the definition of “hubris”.

Hubris is defined as “excessive pride or self-confidence”.  Stage one in this model sounds an awful lot like organizational narcissism. It’s an easy slide from hubris to narcissism. If Collins’ model is accurate, it’s not only businesses that could be on the path to destruction. Churches are susceptible too. Proverbs 16:18 confirms this: “Pride comes before destruction and an arrogant spirit before a fall.”

We all want to be part of something special.

Where is the line between healthy regard for our faith communities and sinful pride? Would we know if we crossed it?

What’s the outcome when beloved institutions are considered so crucial to God’s mission they need to be protected at all costs? What do we do when an “anointed” leader hurts someone? If we’re not careful institutional pride can turn to systemic narcissism. This unhealthy system breeds leaders that feed off the sheep calling it “servant leadership” when it’s anything but.

I’m fascinated by church health. I’m not an expert, but I’m curious if there is a pattern happening in our churches that looks like the model created by Collins. In studying the fall of Bill Hybels, former pastor of Willow Creek Community Church, I’ve started to wonder if the entire Willow Creek system may have been dealing with hubris from early success. (organizational narcissism) For years, pastors and leaders flocked to Willow Creek to learn from them. In 1992 they started the Willow Creek Global Leadership Summit. Annually thousands of people would watch the Summit to learn about how to be better pastors and leaders. All the while, the Willow Creek senior pastor was allegedly engaging in sexually inappropriate words and actions. The elder board failed to take these allegations seriously until the truth was revealed to the public.

Would a narcissistic organization recognize when they were heading for trouble?

When an organization portrays themself as the gold standard for leadership and ministry practices, does that make it harder to admit wrongdoing? That’s a question I’ve been considering. Was the cost too high to admit the truth? Could they engage in honest self-reflection when they were making so much money teaching others the best way to lead? How could they admit a failure in leadership when they led a global summit on leadership?

When an institution places so much value on being the best that it becomes a part of their identity, that leaves little room for self-reflection.  Such a place would be resistant to anything that challenged that identity– even the truth. 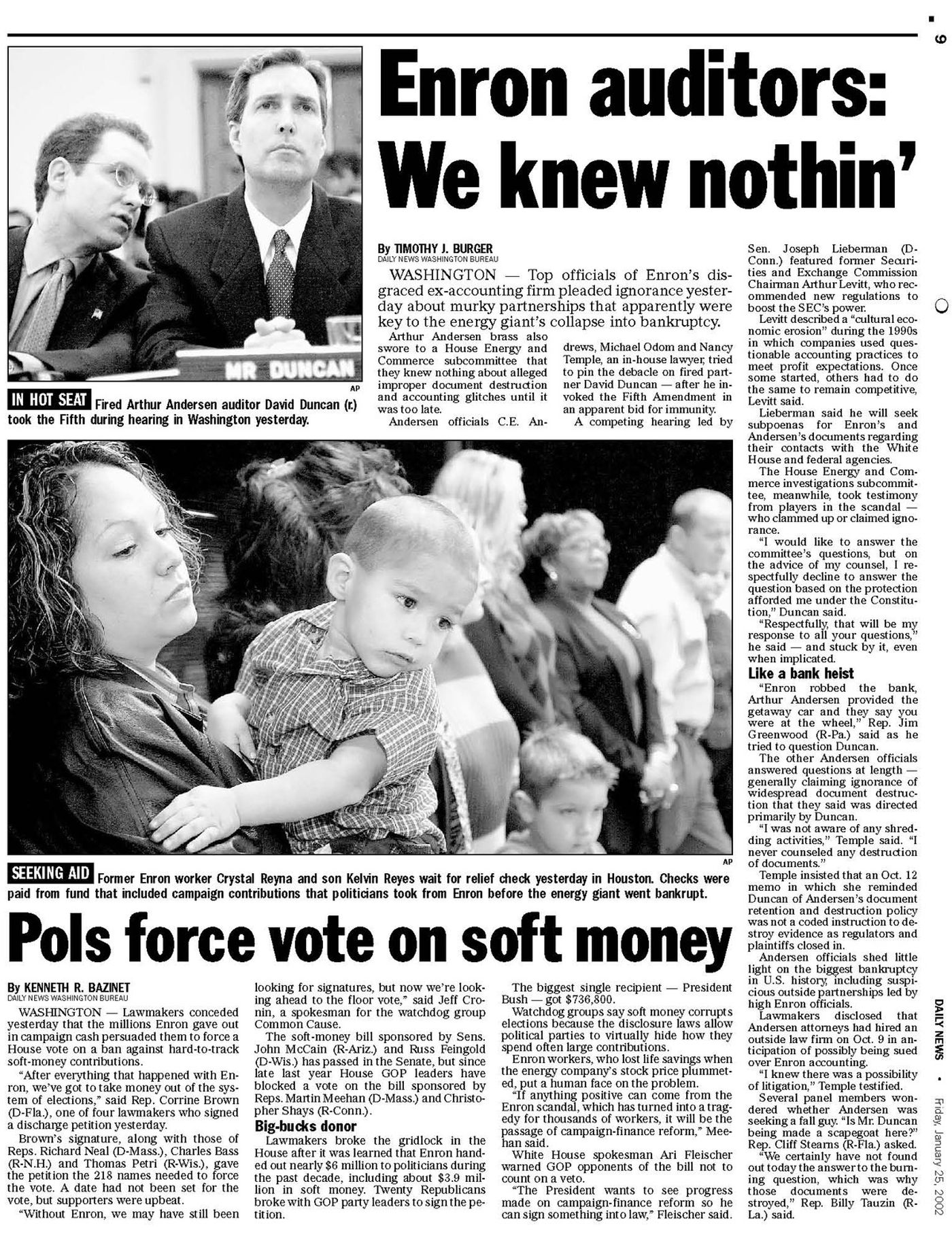 Dennis Duchon and Brian Drake wrote a paper entitled Organizational Narcissism and Virtuous Behaviour. In it, they reference Arthur Andersen, the accounting firm caught shredding evidence for Enron. It was once known for its ethical culture. The founder was well-known for being an honorable man. Arthur Andersen even had a consulting group that taught other companies how to manage their ethics. Unfortunately, as their business model shifted, they didn’t stay true to their founder’s virtuous behavior. Duchon and Drake describe Arthur Andersen as having a “narcissistic identity, characterized by a sense of entitlement, self-aggrandizement, and denial.”

They go on to explain the end result when narcissistic organizations participate in unethical behavior:

“To an outsider, these practices are obviously wrong, but insiders who have internalized the cultures’ logic cannot see anything wrong. Insiders see themselves and the behavior of the organizations they work for as good and right. To question or deny these propositions is to threaten the collective identity, which can not be tolerated.”

It’s sobering.  There’s a denial that results from daily breathing the air of a system that considers itself especially good. Dr. Langberg suggests that it takes breathing in the fresh air outside of the infected system to fully see the truth.

This isn’t an “out there” problem

As I started learning about narcissism, I wanted to point the finger away from myself. My husband says, “No one thinks they are the villain.” (Nathan isn’t sure where he first heard that quote. It’s not original to him) But if we truly believe that we’re sinful,  I need to admit that I’m not immune. I’ve shared Ryan Ramsey’s words on the topic several times. They still ring true:

“I believe that in God’s mercy that door is often cracked open repeatedly in the life of a system bearing His name. He is staggeringly patient and kind. But He will not turn a blind eye or campaign the preservation of our systems. If we are guided by the sin of loyalty (the toxic kind I’m describing) we will slam the door shut every time it opens for fear of what we could lose. If we are guided by the Spirit of God we will have courage to open the door and encounter the possibility of change.”

God chooses to allow us to be a part of what He is doing because of His grace, but He doesn’t need us. It’s humbling, but what a relief! Isn’t it interesting that God chose the least likely son of Jesse to be king? His own father hadn’t even considered him a candidate. He chose a shepherd. Likewise, Matthew 5 tells us who Jesus says are especially blessed: the poor in spirit, those who mourn, the merciful and humble. . .  I Corinthians 1:27 says this:

In a culture that increasingly elevates the powerful, the gospel rejects power. That sounds like a good antidote to the narcissism that tugs at all of us. Ironically, what started with my desire to figure out what was wrong “out there” ended with an answer that pointed partially back to myself.