Yesterday’s sermon illustration included several still shots from the television show Hoarders. It fit the context and made the point, but it did something more inside of me. It reminded me of the battle my son (and possibly two other children) has to fight. It scares me more than a little.

Two years ago, my husband and I started putting some parenting puzzle pieces together. I wrote that our “normal is gone“. I have not written much about our OCD journey since, but this Monday morning, something inside of me is telling me to give you an update on what OCD and hoarding looks like in our house these days. 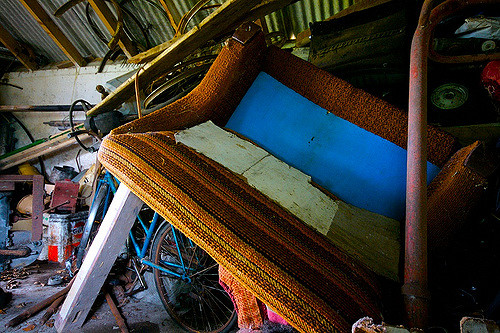 In our experience, OCD is an unwanted house guest. We don’t let him get comfortable. When I see any sign that he’s trying to move in, my spidey senses start to tingle. For the most part, that approach works. It doesn’t always. Last week was hard. Eldest child’s room was stressing me out and was bad enough that nasty things had gone undetected. I quickly went from frustrated that he wasn’t keeping his room neat to alarmed. Worst case scenarios started playing in my head. How is he going to live on his own? Who will want to live like this? What if it never occurs to him to throw out anything when I’m not there to force the issue?

Moms of children with special needs fight a constant battle inside their heads. Is this typical quirky child behavior or is this a sign of a serious problem?  When I suspect OCD is doing the talking for my child, I try to remind him of it. On a good day, I calmly point out that he can fight back against the lies his brain is telling him. On a bad day, when I’m scared, I cry and yell and try to scare him into shutting down the hoarding behaviors.

I make my worst parenting choices when I react out of fear. Fear tells me I need to do something to control the outcome, but anyone who has been a parent more than 5 minutes knows that’s a fool’s errand. I don’t have any control over this. And it’s ironic because hoarding and OCD is all about the brain’s misguided misfires in trying to control it’s environment.

Maybe my child and I have more in common than I thought. He’s learning to let go of things. I’m learning to let go of controlling outcomes. I hoard my illusion of control like he hoards Happy Meal Toys. I still need to hold the line, coach him through hard things and make it difficult for him when he makes poor choices, but I can do that without a vice-grip on things that aren’t mine to hold.