Yesterday, I told the kids that I would no longer be getting involved in their arguments.

It was harder than I thought it would be. Isaac and Audrey started to fight over a toy and Audrey started sobbing and Isaac wasn’t relenting. I really wanted to do something, but the only thing I did was remind them one time that they needed to figure out how to resolve this.

A little while later, I noticed that Isaac was playing with the toy and Audrey had gone upstairs. I decided to go up to her room to see if I could talk to her about it. As I got up to go upstairs, Isaac said, “I’m sorry!” I asked him who he was talking to. He told me he was saying sorry to Audrey. I mentioned that he should probably say it to her and not to me 🙂

When I got upstairs I found Audrey sitting on her bed with her Bible in her lap.

I’m aware that this sounds like I’m making this up, but I’m not creative enough to think of this. I asked her what she had been doing and she told me that she had been reading her Bible and praying.

I’m just going to sit here quietly and let that sink in.

I did nothing to help my sobbing daughter and she decided to stop crying and go upstairs and pray and read her Bible. I would say that turned out better than I could have expected. Audrey can use tears as a weapon to get her way.

She gets her way a lot. I think it was a good thing for her to not get her way this time. Here’s a perfect example of how things usually look: 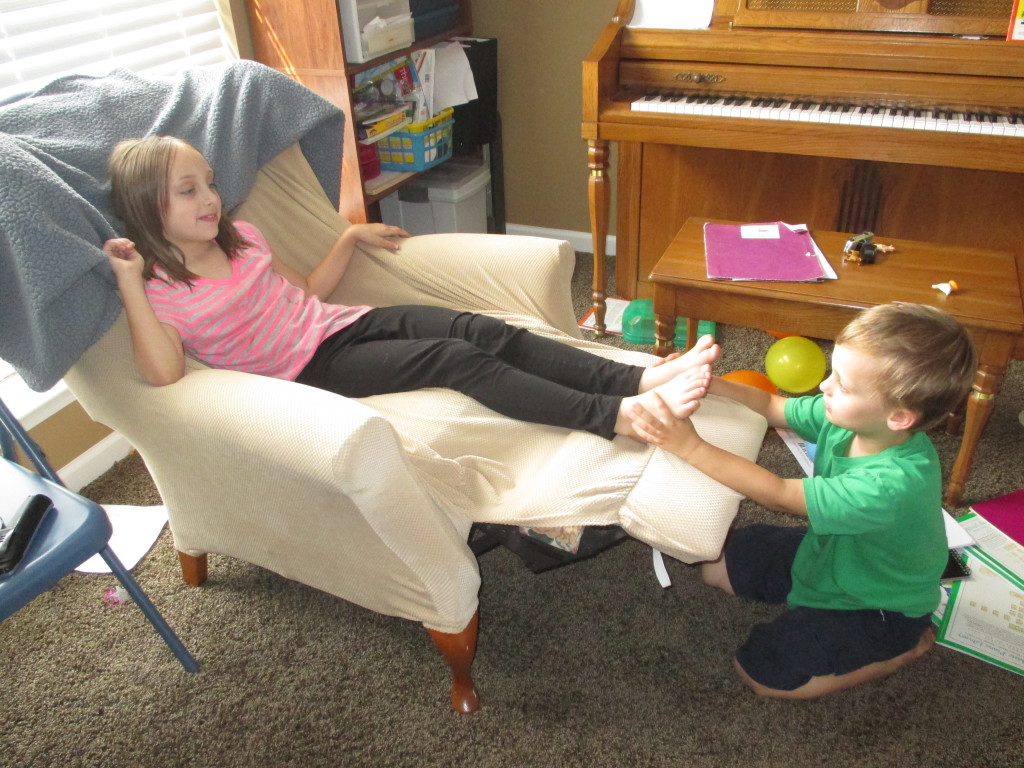 (Yes, this is Princess Audrey with her loyal subject, Isaac, rubbing her feet.)

In the aftermath, I did have a conversation with Audrey and Isaac about what had happened. I coached them through it a little. I think my friend, Jennifer, was on to something with her comment yesterday. I think I be as hands off as possible in the heat of the moment, but still come alongside them later and talk through some ideas of what to do the next time. You can’t always throw kids into the pool and expect them to learn to swim on their own 🙂